Recently during a virtual papal audience via satellite from the Vatican, Pope Francis called out to Sister Norma Pimentel who runs a welcome center in McAllen, Texas, which has served more than 20,000 asylum seeking immigrants.

“I want to thank you,” Francis said. “And through you to thank all the sisters of religious orders in the U.S. for the work that you have done and that you do in the United States. It’s great. I congratulate you. Be courageous. Move forward. I’ll tell you one other thing. Is it inappropriate for the Pope to say this? I love you all very much.“

Three of my aunts were Sisters of the Most Precious Blood and they were testaments to devotion, service, and joy in Christ. What amazing examples of faithfulness I was blessed with. 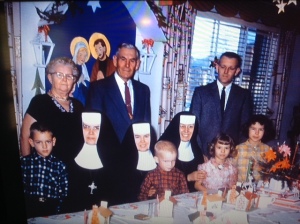 My three aunts, Lucida, Noel and Gene Marie, embodied all that is good about religious life. They were loving women who served God by serving others. They lived in community and shared their talents accordingly. They were intelligent women who were well-traveled and well-educated, not something to be taken for granted by women born in the 1910’s and 1920’s. They were teachers, administrators, catechists, and persons of authority. But to me they were simply my Aunts.

They were our family’s “Blessed Trinity”. They were honored guests and were afforded certain special privileges. When they would visit, Mom would be sure to make their favorite meals (particularly their favorite desserts). At my grandparents’ house it was always a treat when all three Sisters would visit at the same time. Growing up Catholic in the 1950’s and 60’s while having three aunts that were Sisters was the pinnacle of holiness for me – I wore it like a scapular medal. And I must admit that I bragged about it at school or with my friends. I remember that there were kids at school who were afraid of nuns but I knew how loving my aunts were and understood that the Sisters who taught us were also daughters, sisters and aunts, too. It was de-mystifying having nuns in our family. They were just like us (only holier). Some of my happiest childhood memories are laughing and playing with Lucy, Noel and Gene Marie.

As I grew, I understood the many sacrifices my aunts had made in serving God’s people. I was also keenly aware of the joy that they knew while living in community with their Sisters. They modeled for me a progressive faith; where service to others was the ultimate service to God. Instead of dogma and hierarchy; rules and regulations, their focus was on loving ALL of God’s creation. They taught me how to love even the unlovable (which sometimes included me).  There were times when I didn’t believe in God but I always believed in Lucy, Noel and Gene. Priests and bishops would come and go. Crises in our Church (mostly caused by men) would dominate the headlines but my Aunts remained steadfast. Perhaps they saw the folly in a “male only” clergy or perhaps they realized it was insignificant in the grand scheme of God’s promise. Even as cancer and Alzheimer’s took their lives, it didn’t distinguish their light.

They remain alive in my heart and in the thousands of lives that they each served. I for one will always be grateful for their unconditional love. And I share Pope Francis sentiments. “I love you all very much.”

One thought on “Women of Faith”