For several years now we have vacationed on the Gulf of Mexico in Florida with our daughter, son-in-law and grandkids. Last week was our week on the beach. The first full day it rained – all day! So when the sun came up on day two, we were ready to have some fun. Because of the storms from the previous week and the subsequent strong waves and rip tides, red caution flags were flying. My daughter and I were undaunted. We would ride the waves but do it cautiously. After a few minutes in the water it became apparent that we were too far from shore. It all happened very quickly.

My daughter Bess abandoned her flotation device (actually just a swimming pool floatee) and swam toward the beach. As I watched her make it safely to shore the waves pushed me further and further out to sea. I considered leaving my floatee and swimming but by then I was in very deep water and after fighting the waves felt too weak to swim. I held on to my floatee. 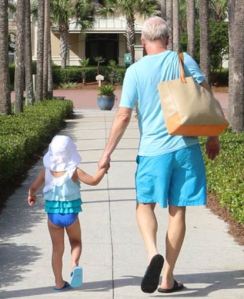 So much to live for…

While I was being submerged by capsizing waves and being pulled by the undertow I came to the realization that I might not make it. My son-in-law swam out to attempt a rescue but the waves were too strong for him (and he’s a strong guy). Again I thought – I MIGHT NOT MAKE IT. I never felt panicky just tired and a little dizzy. I came to the conclusion that drowning wouldn’t be painful – I would probably just doze off and slip into the water – THE END. As each gulp of salt water came more and more frequently it was clear that this was bad – really bad. But I wasn’t ready to die. So I paddled with my arms and kicked with my feet and hugged my floatee for dear life. DEAR LIFE.

After what seemed like hours but was really more like forty-five minutes, through luck and nature’s grace, I finally fought the under tow and came close to shore. A kind stranger came out to help me in the last 20 feet or so. My family met me on the beach with cheers and tears and swears and I collapsed in a heap.

I joked that I wouldn’t need salt on my afternoon margarita and tried to downplay the entire episode. I apologized to my wife Deb who had “told me so”. And I promised to NEVER be so careless in the water again. And I silently thanked God for the grace of allowing me more time.

I don’t know how close my “close call” actually was but it was close enough. Of course I was in the water the next day and several more days after that but only when the red flags were not flying. I’m not afraid to die but I’d rather live (there’s so much to live for!)

Oh, did I mention I saw a shark in the water, too?

3 thoughts on “Nearly a Near Death Experience”