My wife Debbie, encouraged by our friend Bob, recently spent 10 days at the Mexican border serving immigrants and asylum seekers. When Bob returned to The Humanitarian Respite Center in McAllen, Texas, after having been there in December, she joined him. The Center is supported by Catholic Charities of The Rio Grande Valley. She wasn’t there to make a political statement or to judge – only to serve.

The Center offers legal refugees an opportunity to bathe, get clean clothes, a quick meal and to contact their sponsors in the U.S. after being processed through Border Patrol. Many of these people have traveled great distances and under extreme conditions to arrive safely in the United States. Deb had no idea what she would be doing when she got there, but on day two she was put in charge of the kitchen. 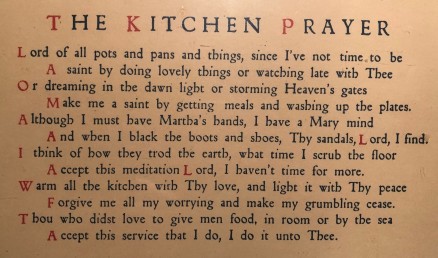 It turns out that as she was feeding their bodies, they were feeding her soul. She spent most days chopping potatoes, carrots, onions, or whatever was donated. She made soups or stews to feed the families. The first day she was making fruit salad and serving it in tiny Dixie cups. One of the regular volunteers told her that she was filling the cups too full and there wouldn’t be enough for everyone. It brought her to tears as these people were starving and she was only able to serve a very small portion. When she cried, the other volunteer also cried. Deb says they held on to one another for the longest time and sobbed. She also tells me that because they served several hundred people each day they would nearly run out of water, bread, vegetables or fruit, but then there would be a knock at the door and whatever was needed would appear – truly God’s blessings.

She says, “Overwhelming is an understatement. These are beautiful people and grateful for the smallest thing. Each day I was bone-tired and an emotional wreck but couldn’t wait to return the next day.”

Some of her stories from her time at The Center are heartbreaking: the child separated from her parents; the young pregnant woman so exhausted and yet so grateful for a late-night meal; the old man who said that he cried himself to sleep while in detention; the mother who considered the “coyote” she paid to help her on her journey, a good man because he hadn’t raped her or her daughter.

But every day was also filled with joyful moments: the many ‘gracias’ she received for the simplest gift of food or drink; the little boy who ran to Deb and hugged her; the other volunteers who welcomed her; the man who told her that she had a loving heart and beautiful soul and that he would remember her forever; the reunion of the little girl who had been separated from her parents; our dear friend Bob who “carried her” through each day.

Every evening Deb left the Center exhausted and yet thankful for being given an opportunity to serve; to be able to put her love into action. At night she would often lie in bed praying for the asylum seekers and hoping they found their way “home” and she would recall the words from a ‘Kitchen Prayer’ that her grandmother gave her many years ago: “…Make me a saint by getting meals and washing up the plates. Although I must have Martha’s hands, I have a Mary mind. And when I black the boots and shoes, Thy sandals Lord I find…”

We all need heroes in our lives. I’m blessed to be married to mine.

2 thoughts on “Love in Action”