This spring a cardinal made her nest in the hydrangea tree in our front yard. We’ve been on “bird watch” since I first discovered the nest with four tiny eggs. Momma bird would sit quietly on the nest until I got too close and then she would fly away chirping (actually squawking) until I moved away from her brood.

A week or so ago the first egg hatched, followed by two more the following day. The fourth egg never hatched. I guess, such is nature. At first the three baby birds were just all eyes and beaks and fluff. Always with their necks outstretched, waiting for momma bird to deliver some sustenance. Momma bird would fly from rooftop to tree to ground and back and then do it all over again and again. She would pull worms from the ground and return to the nest only to fly away again in constant pursuit of food for her young. 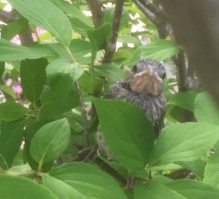 Yesterday as I was looking into the nest, two of the babies jumped out! Then on to a branch and then onto the ground. Momma cardinal became hysterical. The squawking and flapping and flying around was startling to say the least. It was as if she was sounding an alarm. And indeed she had. Soon daddy cardinal was on the scene. Both appeared to be searching for their timid youngsters who had taken shelter in the rose and holly bushes in our front garden. They were like tiny sentries on guard. Desperately struggling to protect their young from what might lie ahead. This morning the nest was empty save for the un-hatched egg. The fledglings have officially “flown the coop”.

All this nature-watching has made me keenly aware of how time marches on. We all were once fledglings who had to brave the unknown. Some of us might have jumped from the nest and others of us might have been nudged. Regardless we somehow found ourselves in unfamiliar terrain dealing with the unimaginable.

As a parent I remember feeling woefully unprepared when my son left for Air Force Basic Training. There was so much more that I needed to teach him! How could the little boy who wore Velcro® tennis shoes to kindergarten (because he hadn’t yet learned to tie his shoes) be prepared to defend our nation? When I walked my beautiful daughter down the aisle on her wedding day I couldn’t help but think of the little girl who I had seemingly held in my arms just days before. And when our youngest son left for University my heart ached with a sense of dread that I had become obsolete. Fledglings three!

And there I was, a daddy cardinal squawking and flapping my wings. Frantic and slightly hysterical. Perhaps more afraid of what was coming my way than what might lie ahead for my baby birds.

But time and experience have taught me that those bittersweet “fledgling moments” are just part of the journey. Life goes on. And usually gets better. My kids still need me. And while I don’t need to provide protection from the unknown, I am still called upon for sage advice from time to time.

Now we have five grandchildren aged 12 to 1. Our beautiful baby Gwen turns one year old today. She’ll have her own “fledgling moments” soon enough as will her sisters and her cousins. I just hope I’m around to squawk and flap my wings as needed when the time comes.