Today is the Feast Day of St. Denis. He is the patron Saint of Paris and France and headache sufferers.

I’ve always been happy to have Denis as my saint’s name because he’s kind of a maverick and a tough guy. According to legend Denis was Bishop of Paris in the third century and was martyred by beheading. He is said to have picked up his own head and walked six miles, preaching a sermon the entire way. Also Denis is the patron saint of headache sufferers, frenzy and strife. This is not surprising considering that six mile trek while carrying his own severed head! 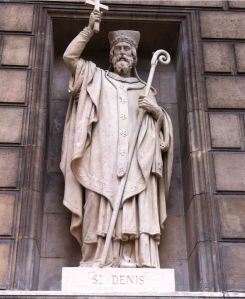 St. Denis – Outside the Madeleine in Paris  (depicted with head intact)

Of course I admire the “saintly” saints who prayed and fasted and gave up all worldly possessions to follow Jesus’ call. We all love the saints who lived simple lives and made tremendous sacrifices for their faith but there’s something about a guy that’s got Denis’s spunk. I mean even the biggies like Francis and Theresa and Patrick and Clare didn’t carry around their own heads post mortem. So in my book Denis is a saint to emulate. Not only was he tough but he was cool. Let’s call it grace under pressure – extreme pressure.

My Aunt Gene used to send me a ‘Saints Day’ card on Denis’s feat day and I will miss that again this year. When Alzheimer’s took it’s grip she forgot about Saint Denis and was sometimes a little fuzzy about who I was, too. But she’s the one who first introduced me to the saint who shares my name. And I have always taken a certain amount of pride (is that a sin?) in the fact that my patron saint was a badass who defied his Roman persecutors!