This Wednesday is Ash Wednesday. Lent, like most everything else in England, will be different this year. 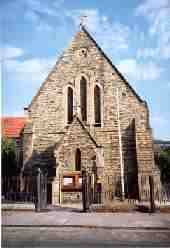 We’ve been attending Mass at St. Peter R.C. Church in Cirencester, Gloustershire. It’s quite a departure from St. Joseph in Cottleville, Missouri. First of all, there is only one Sunday Mass – 11:00 a.m. Secondly it is a very small church; my guess is it might hold about 200 hundred people but 150 seems more likely. Thirdly it’s old; not English old but about 120 years old which is more than 100 years older than St. Joseph’s. And finally, it’s poor; the weekly collection is averaging £240.00 – that’s approximately $380.00. St. Joseph usually takes in $40,000.00 weekly. I suppose the numbers tell a story but only part of the story.

We are proudly Catholic here at St. Peter in Cirencester. Perhaps it’s because our numbers are small and our voices are so few. We are clearly in the minority – dwarfed by The Church of England. But there is great joy and there is much hope and there is abundant love. Our priest, Father Michael Davies, works two parishes – ours and St. Michael’s Tetbury.  He’s not a young man but has an indefatigable spirit and a self-deprecating sense of humour. His energy and his wit belie his years. And his gentle approach to our faith is a nice respite from some of the heavy-handed demands being made by our bishops in the U.S.  today – none of the “my way or the highway” mentality. On Sunday he actually ‘invited’ people to fast and abstain on Ash Wednesday and Good Friday – inviting instead of obliging or demanding. Maybe it’s only because of my pride that I prefer to be asked instead of being told what to do; but ‘asking’ instead of ‘telling’ made all the difference to me.

My yes is yes! to a request, an invitation; not an edict. And that’s what Jesus does – He invites us to share in His passion during Lent. He invites us to journey through His pain and suffering. He offers us His sacrifice – we can accept (or not).

Years ago at a retreat in Wisconsin the priest/facilitator suggested that the Church should be in the business of asking, not telling, so that we can all freely say yes to God’s call.

And so here I am twenty years on and the answer is still yes (when I’m asked).