I grew up with two older brothers – Dave and Dean. My brother Dave, the oldest, has always been my protector, counselor, advocate, defender and friend – in short he’s my big brother and my hero.

Today it seems that we’re in short supply of heroes. Politicians lie to us. Church leaders have abused us (and their authority). Sports stars are too often arrogant jerks. And movie stars, rock stars and television stars seem to be mostly self-absorbed narcissists. So I’m blessed to have a hero in my family. And I suspect that some of you may have once shared a bunk bed with a hero, too.

My brother Dave is only a few years older than me but at times it seemed that we were a generation apart. He was a teenager in the 1960’s and I was one in the 1970’s. He was all “crew-cut and skinny neck ties” and I was all “moppy-haired and platform shoes”. The sixties were way cooler than the seventies – he had the Beatles and Route 66 on TV. I had the Monkees and Marcus Welby, M.D. When Dave was a teenager I was still in grade school and in complete awe of his coolness. I would secretly listen to his Motown LP’s and douse myself with his English Leather® while he was away.

One of the best Christmas presents that I ever got, The Kenner Girder and Panel Building Set®, came from Dave. He bought it with money he earned working part-time at Standard Drug Store. He could have spent all his money on himself. He didn’t have to get me a gift but that’s just the kind of brother he was (and is). I credit Dave for instilling in me the love of design and construction that I still possess today (and have made my career).

Dave was born responsible. Which is perhaps the curse of the ‘first-born’. Parents seem to place all their hopes and dreams on their first child. “Make us proud!” is the command to the oldest. By the time parents get around to the third child the command becomes a plea, “Don’t shame us!” And with the exception of those aforementioned platforms shoes, I believe that I held up my end of the bargain. Oh, and that time that I wrecked Mom’s Corvair (I still say it wasn’t my fault). But while the expectations were lowered for Dean and me, Dave was charged with making them proud. And he did! And he does. 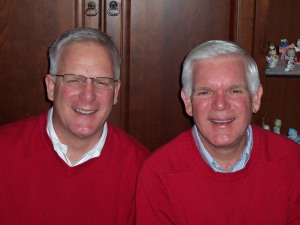 Growing up, Dave did all the tough stuff. He was the trailblazer. He was the trendsetter. Dean and I were the followers. Dave did all the heavy lifting. We reaped the rewards of his older brother wisdom and hard work. He took care of us even when Mom and Dad didn’t ask. And long after he should have. When you have a reliable older brother it’s easy to think that he should just take care of it – whatever it is. Such is the blessing of being the younger sibling.

Dave has always been there when I’ve needed him and has shouldered his responsibility as the oldest with grace and generosity. Anytime that I’ve asked for his help the response has ALWAYS been the same – What, where, when? No hesitation. No resistance. Just support.

So Dave here I am again and of course I am in need. What I need is for you to know that I love you – here, now and always. And you are my hero. I keep hoping that someday I’ll grow up to be like you.