Well maybe it’s true that “boys will be boys” but it’s also true that boys will become men. And as I prepare to celebrate my grandson Noah’s first birthday this weekend, I can’t help but wonder what kind of man he’ll be someday. Certainly he’ll be strong and kind and generous like his Daddy and smart and loving and faith-filled like his Mommy.

Noah already has a distinct personality. He’s happy. He’s curious. He’s affectionate. He’s fearless. And he is single-minded in his determination (he gets what he wants through sheer brut force, when flashing those big blue eyes fails – which is rare). He looks up to his big sister who will no doubt someday have to physically look up to him. But Anna is clearly in charge and Noah seeks her approval in all things. This will likely be a life-long goal. 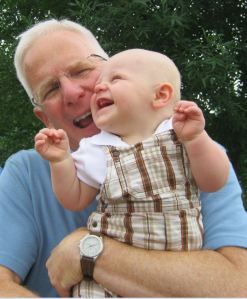 He’s a Momma’s boy but he’s Daddy shadow. He loves to hang on his Nana but Pawpaw can make him giggle the loudest. He likes to play “rough and tumble” but he still likes to cuddle. He’s just a sweet boy. And I suspect that he will be a sweetheart of a man one day, too.

He’s blessed with loving, caring parents, a sister that adores him, and doting grandparents. Some people might say he’s a lucky boy, but we’re the lucky ones. We get to take part in the life of this beautiful gift from God who fills our days with so much joy.

I pray that he always knows how much he is loved. And I hope that all his dreams come true.

Noah, Here’s a little video I made just for you. ~ Love, Pawpaw

One thought on “Boys Will Be Boys…”