My son Tyson is a ‘Momma’s Boy’.  I don’t say that with any disrespect or condescension.  I just mean he is unabashedly a man who loves his mother.  And he ALWAYS has.  He has never been afraid to openly show affection toward her.  His concern and love is at once both honorable and heartbreakingly beautiful.  I’ve heard it said that “the greatest gift a father can give his children – is to love their mother”.  I wonder if anyone has ever considered that “the greatest gift a son can give his father – is to love his wife”?  Ty loves his Mom and of course she loves him, too.  But I get to live with the comfort of knowing that should anything ever happen to me – Tyson would be there for Deb.  That’s what a ‘Momma’s Boy’ does: he loves his Momma!

When Ty was a little guy he needed his Mom like all little boys do:  He needed to be nursed; he needed dry diapers; he needed to be comforted in times of sickness.  As he grew older his needs changed but they still involved Mom: help with homework, lunch for school, clean uniforms, car-pooling to and from sports, scouts, etc.  And as he got even older:  wise counsel, a shoulder to lean on, endless moral support, and undying love.  All provided by good ol’ Mom.

Once when Tyson was in grade school he came to me to upset because he cried too easily.  He always seemed to wear his heart on his sleeve.  Of course this made him a target for other kids at school.  I explained to him that he was like Mom – people that have really big hearts will get them bruised more easily.  I told him it’s the price that you pay for being tender-hearted; that when you have a greater capacity to love, you also have a greater chance of being hurt.  At the young age of 7 or 8, he seemed to understand this.  He decided then that his ability to “love like Mom” was worth the risk of an occasional broken heart.

Tyson never shied away from hugging or kissing his Mom is public.  I still remember ‘Parents’ Night’ each year for the wrestling squad at Homestead High School.  The team would be presented and then the parents would be called forward.  Each wrestler had a bouquet of flowers for their mom.  Tyson always hugged and kissed Deb while presenting her bouquet – most of his teammates sort of sheepishly handed the flowers to their mothers.  I still feel tremendous pride for those evenings.  What a beautiful way to honor his mother.  And he didn’t flinch when ‘the guys’ would snicker or smirk – he was too proud of her to allow their immaturity to ruin his moment. 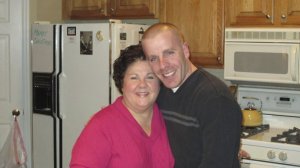 Momma and her boy

Tyson is a smart guy – smart enough to know that Mom is the rock of our family.  She’s the one that will sit up all night to listen to your heartache.  She’s the one that can provide emergency medical care in a pinch.  She’s the one that will put on a meal, make up a bed, throw out the welcome mat or get on a plane if you NEED her.  And it’s not always necessary to ask – Mom knows!  She’s got that ability (call it woman’s intuition or something supernatural) that makes her able to sense stuff that mere mortals can’t see or hear.  She’s like an oracle.  I swear she anticipates calls for help from her children and she’s always ready to spring into action.

When I say Ty is a ‘Momma’s Boy’ I don’t mean he’s a wuss or a cry-baby.  I mean that he’s a man who loves his mother.  I know that he understands what an amazing woman with which God has blessed him. And I know that he will be forever grateful for the man that she has helped him become.