Our two youngest granddaughters spent last week with us. This was kind of a big deal because these two haven’t spent any time away from home without their parents. Ainsley is five and Gwen is three. The five year-old thinks she’s in charge but the three year-old is often the one who is calling the shots. We all learned a few things from our week together. We laughed a lot and cried a little bit, too. Most of my tears were silent. You NEVER flinch or show fear or a three year-old will have you over the barrel! When she cried it was because I said NO! In fairness, nobody wants to be told no. 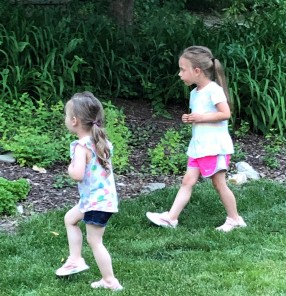 My lovely wife had the lion’s share of the responsibility, as I worked all week, but in the evenings and on the weekend I joined in the fun, too. We played outside everyday. We would have “dance parties” on the patio. Our inflatable pool was a source of joy and learning, as we tried to hold our breath under water (and learned to spit the pool water out after gulping some of it). We played ball in the backyard – soccer or wiffleball or “chase the ball” or whatever. Sometimes our outdoor play included looking for bunnies in the garden and then chasing the elusive beasts back into the lilies or honeysuckle.

It was exhausting and exhilarating. The girls sometimes pick at one another as sisters often do. Mostly over silly things: “Look what I have!” followed by, “I want it!” Or “Let’s play Disney Princesses” and then the fight would ensue over who got to be which princess. Usually we would let the squabbles play themselves out because really Ariel and Jasmine and Elsa and Tiana are pretty much one in the same. However at times adult intervention was required. One thing is for certain, we all went to bed early every night and slept soundly.

I learned that there is a bully at daycare (whose name will not be used to protect the innocent). This girl has been very rude (or WUDE as Gwen explains it). Apparently she has told our adorable granddaughter that she isn’t her best friend. And of course this hideous child has also pushed in line on occasion and says “oh my gosh” – which apparently are bad words in some circles.

One day Gwen told us that her baby doll would need to go to the doctor. This was all the more amusing because Gwen has the raspy voice of a two-pack-a-day smoker and declared matter-of-factly, “My baby’s dead!”  I thought it seemed a little late for the doctor but I’m not three.

Truth is, I learned more from them than they learned from me. I learned we should all play outside whenever we can. We should dance on the patio and not worry about who may be watching. Ice cream cones should be served with every meal. We should all take more time just to be silly. We should all laugh more and cry less. And we should all (not just the girls) wanna have fun!

Maybe they should stay for two weeks next summer. I think I have a lot more to learn.