I travel quite a bit for my job. It can sometimes be a humbling experience.

When I was a child I thought that business travel seemed glamorous and exotic. Fancy hotels with bellhops, jetliners with stewardesses and restaurants serving martinis at lunch were all depicted in the movies and television shows that I watched. I wanted to be Cary Grant or Sean Connery. Jet-setter. High-roller. Globe-trotter.

Instead I’m the schlub who lugs his bags into a discount hotel after spending painful hours cramped in an airplane seat so small that it seems to have been designed for pixies or driving a (less than clean) rental car for far too many miles while being equally frustrated and flummoxed by which side of the steering wheel the wipers are on and where the little button for the gas cap release is hiding. Cary Grant never had to deal with this crap.

Because I’m usually out-of-town for a few days in a row, I will on occasion buy groceries (you know – that already made stuff that can go in microwave) so as to avoid another dinner alone at Panera or Applebee’s or wherever. I will then “cook” in my rental suite while growling at the news of the day on television.

Recently after a long day, with a simmering headache, I decided to stop at the Kroger in Jeffersonville, Indiana and grab a few things. The checker’s name tag informed me that she was Delilah (although in all honesty, I was more interested in reading one of the messages tattooed across her neck). Delilah was big in all the wrong places and she had hair that was a color not found in nature. She proceeded to comment on every single item that I had purchased. Apparently Cokes have names on them now and she asked if my name was Landon because my Coke was named Landon. Of course because I had a headache and was tired and cranky I wanted to say, “Why yes, I make it a rule to only buy soft drinks with my name on them.” “You can imagine my delight in finding the rare ‘Landon’!” Instead I just grunted “no” and hoped she would shut up. Which she didn’t (or couldn’t). She went on to tell me that she had tried the salad that I bought and it wasn’t very good. In my self-righteous indignation, I wanted to sarcastically thank her for her culinary advice and compliment her neck tattoos and nose ring, but instead I just took my lousy salad and my ‘Landon’ Coke and left. 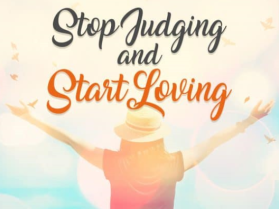 Later while getting into my rental car, I saw Delilah. She was hard to miss – neck tattoos, body piercings and all. She was patiently helping an old woman get into her car and then loaded her groceries in the trunk. She took time to speak to this woman and more importantly to listen to her. She absolutely refused to take a tip. She thanked the woman, wished her a good day and offered her blessings.

Wow. What a complete jackass I had been. Perhaps instead of judging my checker’s apperance, I should have been looking into her eyes. Instead being annoyed by her friendliness, I could have shared a kind word or smile. Maybe then I might have seen some of the beauty that the old woman had experienced. Cary Grant likely would have.

Instead I went to my economy hotel suite and ate dinner alone and realized that I missed another opportunity to love like Jesus. And in spite of my arrogance and heartlessness I realized then that I’m forgiven even when I struggle to forgive myself. It’s humbling to know that God still loves me in all my selfishness, vanity and absurdity.

And by the way, Delilah was right about my dinner choice. It wasn’t very good.

Stop judging, that you may not be judged. For as you judge, so will you be judged, and the measure with which you measure will be measured out to you. Matthew 7:1-2

One thought on “Headache and Heartburn”