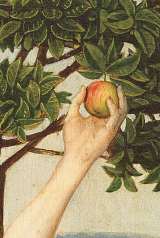 If you ask most folks about the story of Adam and Eve, a likely image that they’ll recall is the apple. Eve offered Adam the apple after the serpent convinced her to eat it. It’s hard to blame the first couple for the whole apple ordeal because they had no one else to ask and the Internet hadn’t been invented so they couldn’t “Google” the serpent’s claim to see if it was accurate. I kind of get it. Who hasn’t received some lousy advice and made a few bad choices along the way?

Anyway, the thing is. It may not have been an apple at all. The Bible just says forbidden fruit. It doesn’t mention an apple by name. The poor apple is blamed for the whole Original Sin/Driven out of Paradise mess. Heck it could’ve been a pear. And I don’t even like pears but I still think of the apple as the culprit. Strange how images or ideas get stuck in our consciousness. It could have been a banana or a pomegranate or something we don’t even have a name for now.

This whole thing makes me think about how often I have been the apple. How many times have I been the misidentified fruit? You know, the guy that gets the blame (or shame) for something that he really didn’t do. Or worse, how often have I assigned blame to an innocent person? Assuming that because of circumstances or associations or appearances someone “who could be an apple” is guilty of something.

When my kids were teenagers I used to say, “If you look like a duck, and quack like a duck, and hang out with ducks, people will assume you too are a duck.” The intent was to have them choose friends wisely and avoid troublemakers. I realize now that I was only reinforcing negative stereotypes and sending mixed messages as I constantly implored them to also “think for yourselves” and “stop following the pack”. My parental failures are epic…

The point is: I need to seek the truth. I need to stop calling out the “apples” in my life. After all the “apples” might not even be the offenders. I need to make my decisions based on love and faith and honesty, not on fear and rumor and prejudice. Not everything is black and white. My world is many shades of gray (and thankfully lots of color, too). While on this journey of life I will make some mistakes and break some hearts and do some irreparable damage. I hope that God will forgive me when I have judged too harshly; when I have failed to see the good in others; when half-truths have clouded my ability to reason. I pray that those I have offended will understand my ignorance and excuse it even if they cannot forgive me.

“It is only about the fruit of the tree in the middle of the garden that God said, ‘You shall not eat it or even touch it, or else you will die.’”