My grandson is named Noah but his nickname is Buster. And more than a few times I’ve heard some responsible adult exclaim, “Oh Buster!” Sometimes in exasperation or fear, but most often in amusement. Such is life with Buster. He is a two year-old dynamo! 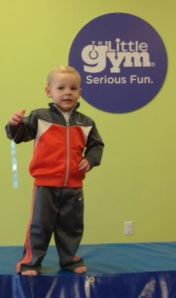 Winning a ribbon for what he does best – jumping, running and tumbling

Noah has one speed – fast! And he is fearless (well he’s not afraid of me). He’s the kid that leads you right up to the precipice and then beams that beautiful smile while you tumble head-over-heals into his abyss of toddler silliness. I have snatched him out of harms way more than a few times (nearly running into the street, jumping off a too-high platform, grabbing a knife off of the counter, dragging the dog by her tail). He’s NOT a bad boy; he’s a TWO YEAR-OLD boy. He knows how to do a lot of things; he doesn’t understand the consequences of most of the things that he does. It’s this delicate balance of danger and freedom and joyfulness that is fascinating to him (and maddening to his beleaguered grandfather). Oh Buster!

Still I love it all. And of course I love him so much it breaks my heart every time he gets a new bump or bruise or gash on this perilous road to self-discovery. He is undaunted and usually just picks himself up and brushes himself off and moves on to the next challenge (danger). Always with a bounce in his step and smile on his face. 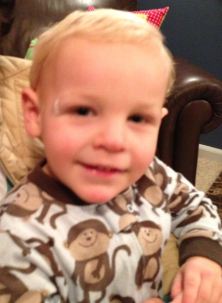 Of course he’s a lover-boy, too. There are plenty of hugs and kisses dispensed by my little man. I suspect he knows just how disarming his smile is and he employs it as a defense mechanism. It’s hard to be angry over his minor transgressions when they are accompanied by a twinkle in his eye and his beaming smile. And few things sound sweeter to me than when he and I are walking somewhere together and he announces, “Pawpaw carry you!”, which is two year-old for “Pawpaw will you carry me?” And of course I will!

So we’ll be buddies as long as he allows. It’s such great fun! His spirit of adventure reminds me that usually it’s easier to beg for forgiveness than to ask for permission. So I’ll do what I can to keep us both out of trouble. And I’m certain that we’ll hear the occasional “Oh Buster!” but we’ll just keep smiling.