Two weeks ago Deb and I fulfilled a life-long dream. We went to Paris. The real Paris; the one in France.

Turns out the real thing is way cooler than the ‘Paris Hotel and Casino’ in Las Vegas or the Paris section of Epcot in DisneyWorld. But part of me kept expecting to see Louis Jourdan or Leslie Caron stepping out of a five-star hotel with Charles Boyer or Maurice Chevalier at their side. I suppose I thought that La Vie En Rose would be playing on every corner. Everyone wearing berets and eating baguettes.

Growing up in the sixties Paris was the epitome of class and style. Everything French was fabulous. I watched movies like ‘Gigi’ and ‘An American in Paris’ and ‘Paris When It Sizzles’ and all of the ‘Pink Panther’ movies. I thought that French Provincial furniture was the pinnacle of design and good taste. And Paris fashion was, well, haute couture. Everything that was French or Parisian seemed to me to be jet-set, sophisticated and très bon. For a boy living in a small town in the Midwest it sadly also seemed unattainable. 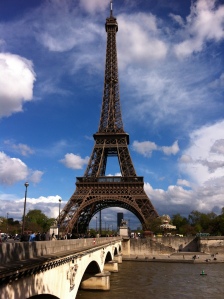 Of course as I got older my perception of Paris has changed but only slightly. No longer did I expect to see the Hollywood version of Paris but a more crowded, grittier, busier, less glamorous version.

Turns out most of my assumptions were wrong. Paris is beautiful and very assessable. Most of the major tourist attractions are an easy walk or Metro ride away. Like London and New York it is a busy city but not overly crowded (at least where we were). Generally speaking the hotel staff, café waiters and museum personnel that we encountered were friendly, helpful and appreciative of our feeble attempts to speak a few words of French.

But being there – walking through the streets of Paris is hard to put into words. I just kept being overwhelmed by the sheer beauty of it all. The monuments – Eiffel Tower, Arc de Triomphe, The Obelisk in The Place de la Concorde were all more impressive in person than what I have seen in photos. Notre-Dame Cathedral and The Louvre are simply magnificent. The River Seine was amazing. And a personal delight were all the statues, plaques, and place-names in honor of St. Denis patron saint of Paris.

But being in the ‘City of Love’ with the one that I love was the greatest experience of all. Deb and I started out young, poor and in love. Dreams of one day walking arm in arm through Paris seemed like that – just a dream. But there we were.

And by the way, we did eat baguettes and listened to La Vie En Rose compliments of someone playing an accordion on the streets. It was sublime.

3 thoughts on “April In Paris”