Last week we went canoeing on the Fox River in Wisconsin. Turns out we went canoeing IN the Fox River. This should have been the easiest canoeing trip ever (and in lots of ways it was) but still we managed to tip our canoe over and “become one with the river”. Now my wife will tell you this is my entire fault but it takes two to canoe (or two to canoe badly as the case may be). I’ve been canoeing 3 or 4 times in my life and 2 of those times have been with Debbie and both times we’ve ended up in the water – so our record is 2 for 2. Never turned a canoe over without Deb in it – I’m just sayin’… 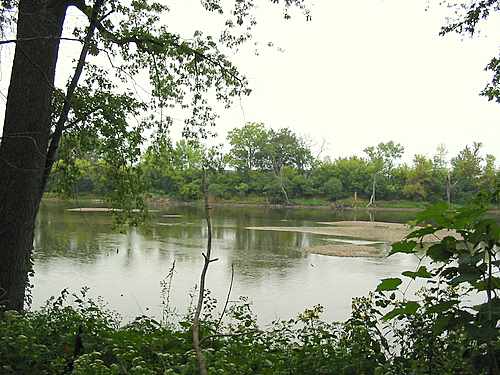 We were with our friends Sue and Jeff and fortunately for Sue we provided plenty of opportunity for her to flex her laugh muscles. Sue assures us that the guffaws did not begin until after she knew that we were safe – or that Debbie was safe – she never actually mentioned my safety…hmmm? So depending on who is telling the story, here’s how it went down (no pun intended):

Debbie’s version: We were effortlessly skimming along the river when, all of a sudden, Denis shirked his responsibilities as co-captain and allowed the canoe to head directly toward the shore. He carelessly ignored my warnings and we crashed into the stony river bank. The jolt of our unexpected landing sent shockwaves several miles down the Fox River. Of course because we slammed into the bank, the canoe capsized and we narrowly escaped with our lives. It’s only because of my valiant efforts that we managed to survive the entire debacle at all.

Sue’s version: I was taking a break from paddling and was therefore able to witness the entire accident. Debbie and Denis apparently had gotten caught in an eddy in the river when strong winds slammed their canoe into the embankment. I screamed (this was later mistaken for laughter but I WOULD NEVER LAUGH AT MY FRIENDS’ MISFORTURE). I paddled our canoe to them and single-handedly saved them (I think Jeff may have been asleep). It’s only because of my valiant efforts that they managed to survive the entire debacle at all.

Jeff’s version: I warned Debbie and Denis to be careful! That river can be treacherous –it’s outdoors and everything! I was startled awake by Sue’s laughing (I had dosed off due to a sugar-crash from the previous day’s tour of fifteen bakeries in Southeastern Wisconsin and was having a glorious pastry dream). When I came to I noticed that Debbie and Denis were both in the water and that their canoe had filled with water. It’s only because of my valiant efforts that they managed to survive the entire debacle at all.

My version (AKA – THE TRUTH): I was watching a couple of dragonflies mating and sort of lost track of where we were in the river. Debbie yelled that we were going to “HIT THE BANK”! I asked her to remain calm (this didn’t happen). Of course when we nudged the river bank Debbie’s flailing arms caused such a wake that we capsized. I thought that the cool water actually felt pretty good. I don’t mean to brag but I did SAVE DEBBIE’S LIFE. It’s only because of my valiant efforts that we managed to survive the entire debacle at all.

I guess it’s true what they say, “Whatever ends well, something.., something…” Anyway, we’re back home now and dry. So today I’m thanking God for good friends, good times, and memories that will last a lifetime.  And that’s THE REAL TRUTH.