I’m certain there must be T-shirts with that emblazoned on them.  The truth is that I went to China and didn’t get much more than jet-lag but I did manage to bring back a few trinkets.  Plus I now have some limited knowledge of a country that I had never visited.

My trip began badly – never a good sign.  I was supposed to be on my way to Shanghai last Monday but flights to Chicago (my connection) were cancelled due to weather.  This was puzzling because it was beautiful here and according to friends in Chicago the weather was fine there, too.  So my trip was delayed by one day and what I had hoped to have five days to accomplish was squeezed into four.  I arrived in Shanghai on Wednesday afternoon, traveled to Shenzhen (Southern China) on Thursday evening, back to Shanghai Friday night, and then left for home on Saturday.  In between I toured three factories.  World travel – how glamorous!

I’m not really complaining (well maybe a little) because I’ve wanted to make this trip for years. 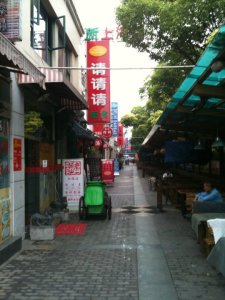 Here’s what I found:

The city of Shanghai is beautiful.  Everyone that I encountered was gracious and very hospitable.  Hotels are clean and modern and the food was fantastic.  Most of the buildings in Shanghai are new.  The architecture is stunning.  There is lots green space – all new structures are required to incorporate at least 30% of their development to gardens, landscaping, etc.  The freeway system is fast and efficient.  The airports are very modern and well equipped.  Workers seem generally happy and the standard of living has increased exponentially in the last several years.  And the quality of the product that we manufacture in China surpasses what we are able to produce domestically.  Plus shopping is fun and friendly. And bartering makes it at least feel like you are getting some great deals.

On the other hand, in Shanghai there are 22 million people that all seem to want to be first in line.  Personal space is not a concept that they have embraced – in a culture where everyone lives in such close proximity, it is completely acceptable to cough or sneeze in another person’s face.  Stop lights and stops signs are merely a suggestion – motorists just drive as if no one else is on the road.  Pedestrians have no right-of-way!  Peeing on the street is not frowned upon (I thought this only occurred on Bourbon Street in New Orleans).  Chairman Mao is on their currency.  Factory workers generally will not make eye contact with foreigners and then they will salute you as you leave their plant (I found this particularly unsettling).

This trip, as most international travel does, made me keenly aware of how big this world truly is and how insular my life has become.  I have always considered myself to be adventurous and open-minded but the truth is: I like my life; my stuff; my way.  I like routine.  I need familiarity.  But that doesn’t mean that I don’t like to travel and try new things.  It just means I need to get “home” and hold on to the ones that I love.  Nothing felt better than being with my family at Mass on Sunday morning and holding my granddaughter.  I guess that’s why Mass on Sunday is important to me.  It’s mine.  It’s my family’s.  It’s our time together with our God.

So after my whirlwind trip I’m back in my office today and suffering from jet-lag and oddly (sort of) missing China – at least the little bit of China that I now know.  I expect to return in a few months for more product review and plant tours and maybe a trip to Hong Kong.  Until then I’ll try to read more about China and become better prepared for when East meets West.  And I will look forward once again to “coming home”.